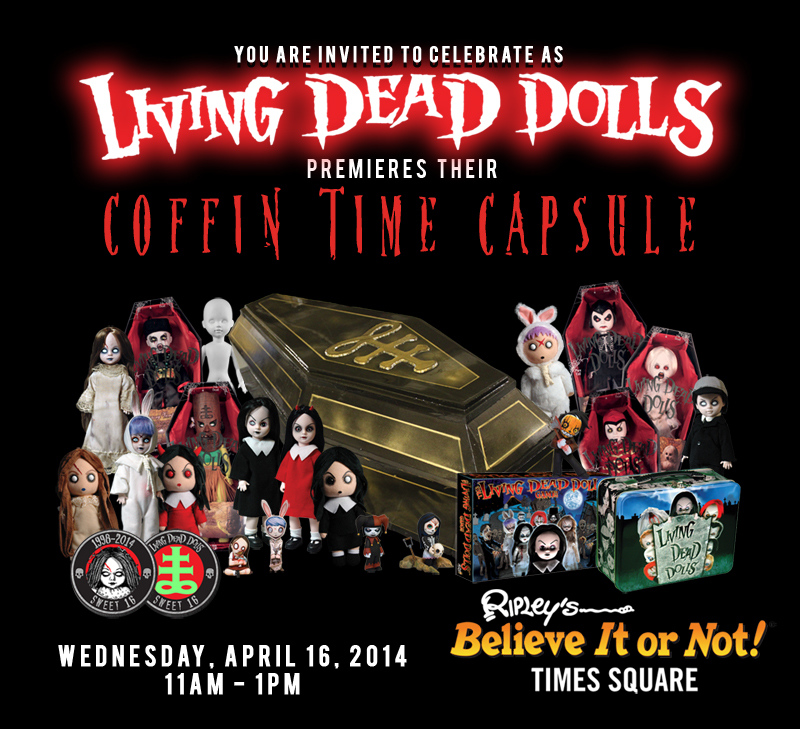 NEW YORK (April 1, 2014) - As part of the yearlong celebration of the 16th anniversary of the Living Dead Dolls, Mezco Toyz will preserve the dolls' legacy in a most unusual fashion; a time capsule with a "deadly" twist.

To kick-off the search for the special anniversary Living Dead Dolls' tomb, Mezco will reveal the uniquely crafted time capsule to the general public for the first time on Wednesday, April 16, 2014 from 11am-1pm at Ripley's Believe It Or Not! Times Square Odditorium on 42nd Street in New York City.

The first 160 fans to come view the display will receive a special limited edition commemorative coin made in celebration of the 16th anniversary of the dolls. Fans attending the unveiling will also receive a 20 percent discount off admission to the Ripley's Times Square museum.

The "casket" will be delivered to Ripley's Odditorium in the infamous Hearsula - The Cadaveric Superior Hearse by Joe Baxter and Reaper's Rides Hearse Limo Service. This extraordinary vehicle will remain at Ripley's Times Square during the event so fans of the macabre may take photos. The creators of the Living Dead Dolls will also be in attendance to sign autographs and pose with fans.

The Living Dead Doll Time Capsule will contain artifacts from the sixteen year history of the dolls with a formal "burial" scheduled for later this year. Mezco and the Living Dead Dolls are searching for a privately owned, family mausoleum with an empty chamber to house the time capsule. Mausoleum owners who have unused chamber and are interested in housing the time capsule are encouraged to contact Mezco Toyz at: LivingDeadDollsCrypt@gmail.com with details.

In early February at the 111th New York International Toy Fair, The Living Dead Dolls received the world record certificate officially proclaiming them the "World's Longest Continually Produced Series of Collectible Horror Themed Dolls. "A replica of the certificate will be among the artifacts preserved in the casket shaped time capsule.